I told Ben he was mad. “Why sell these? Keep them for ourselves,” I said. “Mate,” he said, “We’re here to spread the love. Put them up on the site!” So here you have them… the opportunity to buy this super rare vineyard selection of gold standard Alheit wines plus a bottle of 2018 Cartology to boot at a ridiculous price.

Buy this and you have a collection not many others will see. In fact we are only making 5 available and the price may well go up.


Chris Alheit, ‘2017 was the first vintage that we’ve bottled something from Oudam farm as a stand-alone wine. We’ve been working with the Visser family since 2011 and have been planning this wine since 2015.

They chose the name Huilkrans, the name of a cliff on the farm that weeps when it rains. Since the untimely passing of their son Kallie in 2017, the name now has an unintended double meaning. Even so, they’ve elected to keep it unchanged. The label pays homage to Kallie. In fact, he was largely responsible for farming the great 2017 vintage.

There is something so very special about this place in the mountains – isolation, old vines, low rainfall, deep red sand over red clay. If Magnetic North is the tenor voice of Skurfberg, then Huilkrans must be the deeper baritone. It works on a lower, richer frequency, but still unmistakably from this great appellation.’

Somehow both smoky and dusty/chalky in its mineral character but there’s a creamy note too – very complex already. So juicy and generous on the palate, gushing with citrus fruit on the palate after the spicy nose. 17+  Julia Harding, MW of JancisRobinson.com

Chris Alheit, ‘As is typical in the Cape’s older Semillon vineyards, there are some dark skinned Semillon vines inter-planted with the light skinned Semillon. This oddity is virtually extinct in the rest of the world, and so affords us a chance to make something uniquely South African.

Not all of the old Franchhoek Semillon vineyards are planted on good sites, but La Colline certainly is. The vineyard is a joy to work with. At this age, the vines are very settled, giving a dependable crop of perfect little yellow and pink pearls of flavour. The wine it produces has a remarkable depth and mouthfeel. It’s not easy to define what makes Semillon such a great grape or such an interesting wine, but it’s an indispensable part of Cartology.

From 2014 onward we started bottling parts of this vineyard as a Single Vineyard wine. The first rendition was called Arrow Heart Semillon, made mostly from the dark skinned grapes, or Semillon Gris (this oddity still grows in some of the Cape’s older vineyards, though it’s virtually extinct everywhere else on Earth). The resulting wine was strange in a good way and good in a strange way.

From 2015 onwards, we made the decision to simply pick the grapes just as they grow in the vineyard and whole bunch press them all together. The resulting wine is somewhere around 10 or 15 % Semillon Gris, the rest Semillon Blanc.

The main reason for this change in approach is that we feel like it’s a better, or truer reflection of the old vineyard, and perhaps closer to what a dry Cape white wine may have been like back in the 1800’s. We think it’s important to respect this, and to make a wine that speaks about the place in its entirety.’

Everyone that buys grapes from Anton Roux’s 1936 Franschhoek Vineyard makes an exceptional wine with them. Combining Semillon and small amounts of Semillon Gris, this is a herbal, waxy, multi-layered delight with notes of camomile and green tea and dense, focused flavours. 96/100 Tim Atkin MW

Chris Alheit, ‘These remarkable little parcels are planted in the Citrusdal Mountain viticultural district (aka Skurfberg) on a high mountainous ridge at 520 meters above sea-level on very red iron rich sandy soil. The real kicker isn’t the great view of the Cederberg nor the distant Atlantic, but that fact that this block is planted on its own roots.

Yep. It’s an ungrafted dryland bushvine Chenin vineyard planted high up. We almost called it El Dorado. Half of the vineyard had already been pulled out when Basie van Lil, a man we know well and have worked with for years, nonchalantly showed it to us “just in case” we were interested in salvaging it.

Why the odd name? The vineyard lies a few degrees off true north from our cellar, roughly on magnetic North. The name implies distance and exploration. It implies a true course of action or movement. It implies an attractive force causing us to drive miles and miles for these vines. There is plenty of iron in the soil, which is a magnetic element, so that fit nicely too.

In physical reality, Magnetic North is always moving, it never remains in the same place, so there is the added implication of a mysterious unattainable target.

Since it’s maiden vintage in 2013, this wine has become a perennial star in our lineup. It’s the one we would send out to war if you know what I mean. Every vintage it managed to combine power and finesse in a way very few other Chenin vineyard from anywhere (not just the Cape) are able to do.’

Herbal where the Huilkrans is spicy, more green fruited. The acid seems higher here because the fruit is less mouth-filling but there is real elegance and finesse. Juicy, mouth-watering persistence. 17.5  Julia Harding, MW of JancisRobinson.com

With a pH of 3.1, despite almost completing a full malolactic fermentation, this is racy, pure and almost supernaturally focused with incredible palate length. 98/100 Tim Atkin MW

Chris Alheit, ‘This wine is something like an ode to the Paardeberg. This mountain holds a mythical place in our minds. It’s the landscape that sparked the wine revolution that’s currently sweeping the Cape. It’s home to modern heroes like Sadie Family, AA Badenhorst, and David & Nadia. Several other top producers also buy parcels from the mountain.

What’s so special about it? In a few words: pure decomposed granite soils, and an abundance of old dry farmed bushvines, much of which is Chenin – an embarrassment of riches. Typically, the wines from Paardeberg have a real sense of purity or clarity about them. At their best, they can be quite powerful without being heavy.

Fire by Night comes from the Joubertskloof side of the mountain, from three very special parcels of Chenin Blanc grown on Nuwedam farm, planted between 1974 and 1980. We’ve worked with these parcels since 2011 and feel that they exemplify the beauty of the mountain.’

A little less open than the Cartology. Some lime fruit and crunchy green apple, tangerine as it opens. A gentle oak mealiness on the palate and fabulous fruit purity with a dry finesse that seems to be the granite effect. Utterly mouth-watering without being tart. Very persistent. 17.5  Julia Harding, MW of JancisRobinson.com

Fire by Night comes from a farm that Chris Alheit acquired in August 2019, which secures the source of this impressive Chenin. Made with fruit from a cooler, morning sun-facing parcel, it shows the taut, almost austere minerality that’s a feature of the Nuwedam farm, layers of spice, lees and subtle oak and lovely precision. 94/100 Tim Atkin MW

Chris Alheit, ‘Cartology has become our staple offering. It serves as a poster child wine for our project (and I dare say for Cape heritage wines in general). In theory we should be able to make an excellent version pretty much every vintage. It’s the best possible introduction to our wines. As a rule, the Cartology parcels are dry farmed bushvines, with a minimum age of 30 years, although most are around 40 years old. We’re extremely picky about the parcels that are allowed to make this wine. To illustrate this point, it happens sometimes that even vineyards that feature regularly in Cartology are declassified if they have a mediocre vintage.’

Some citrus fruit, green fruits and a light stone-dust minerality. There’s a note of oak spice but it’s subtle. So seductively creamy on the palate but with a piercing freshness to balance. Intense and alive. Stunning new vintage. 18 Julia Harding MW of JancisRobinson.com

Is this the best vintage of Cartology since the maiden 2011 release? I reckon so. Made from a blend of Chenin Blanc and 10% Semillon, spanning the Western Cape from Citrusdal Mountain to Faure, it’s weighty yet ethereal, with lots of leesy intensity, subtle oak and pear and citrus fruit. 95/100 Tim Atkin MW 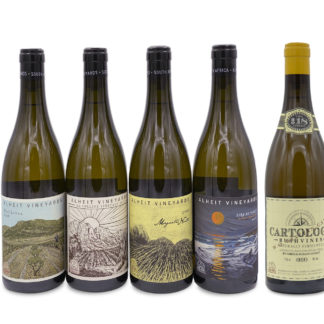