View cart “Erika Obermeyer Cabernet Sauvignon 2015” has been added to your cart. 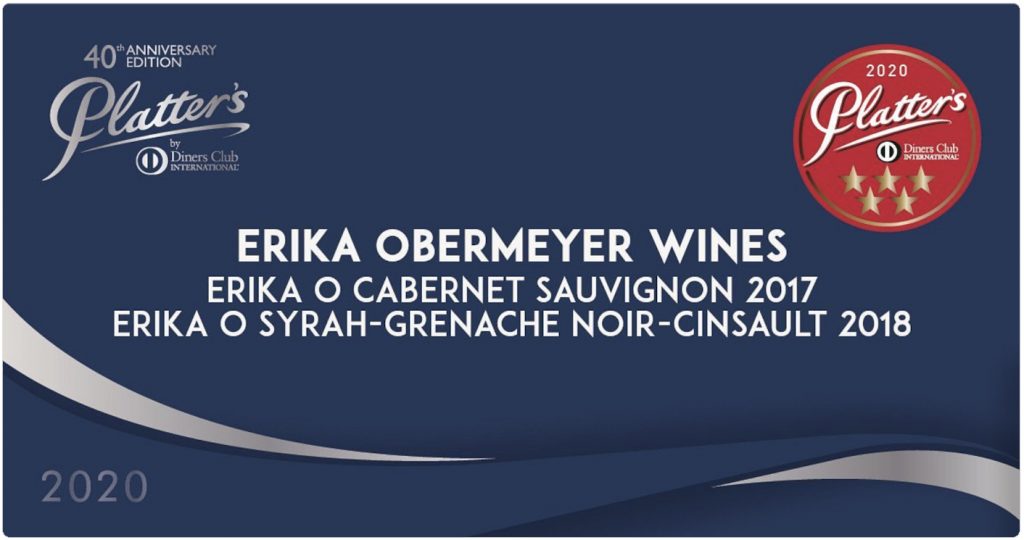 … elegant label. Deep, inky crimson. Initially there’s some alcohol on the nose but behind that is fragrant and classic South African Cabernet – fully ripe but with an inviting leafy side to the black fruit. The oak spice shows a little more on the palate than on the nose but the fruit is nevertheless intense and pure, with a nice rocky/dusty aspect to the aroma. Still remarkably primary given the time in bottle but the tannins are smoothing out even though they are still pretty powerful and compact.  16.5++/20 Julia Harding MW of jancisrobinson.com

Fruit is from a 17-year-old vineyard planted on deep granitic soils in Firgrove, Stellenbosch. The Firgrove vineyards lies between Somerset West and Stellenbosch at the foot of the Helderberg about 6 km from the False Bay rim.

The unique soils originated around 500-550 million years ago when South America and Western Australia came crashing into the Cape. This particular collision deposited and broke off large amounts of granite forming what we now call Firgrove – a ridge sweeping up from the False Bay rim. The result, 500 million years later, is granite gravel soils. Underlying these low, water holding, nutrient poor top soils is a layer of laterite which we commonly call “Coffeestone”. This Coffeestone is made from mineral elements of the decomposed granite; once more fusing together to make what is essentially a very coarse, porous layer in the soil with good water and nutrient qualities.

Below this we have partially decomposed granite in the form of saprolite. This subsoil, into which the vines push their roots, is the “Tough Times Bank” where the vines can access water and nutrients in slow release through the latter part of the season. As the soil dries out, the clay cracks and allows the vines to plumb deeper to keep going. The close proximity to the cold Atlantic Ocean, with a view of False Bay from Hangklip to Simonstown, ensures slow ripening. Sustained winds control the vigour resulting in an overall terroir effect of small bunches, small berries with concentrated berry flavours and full structured but ripe tannins.

The 2015 has been billed as one of the Cape’s great vintages of the modern era! Good reserves were accumulated during the post-harvest period in April and May, after which leaf fall generally occurred at the perfect time. A cold wet winter led to the accumulation of sufficient cold units for the breaking of dormancy, which contributed to even bud break. Warm weather in August resulted in earlier bud break. A warm, dry and windy summer followed, keeping vineyard growth under control and accelerating ripening by 2 weeks. Although the dry, warm conditions necessitated additional irrigation, the dry weather during the harvest time was ideal to ensure healthy grapes without diseases or rot.

With the absence of the usual heat waves, cooler than usual weather in February was ideal for ripening and harvesting. Lower temperatures at night during this time contributed towards good colour and flavour. Temperatures warmed up again in March, which led to the harvest ending close to 2 weeks earlier than usual. The 2015 vintage produced Cabernet Sauvignon with plenty of flavour and power, ripeness of fruit and tannin, complexity and finesse and exceptional ageing potential.