View cart “Naudé Cinsault 2017” has been added to your cart.

From 20+ years old dry-land Cinsault bush vines grown on the decomposed granitic soils and aged on its lees for 6 months in old French oak. This wine is a true representation of this wonderful variety, characterised by crystalline purity of crunchy red berry fruits and bright fresh acids. With its silky tannins and complex aromatics of rose petals, cherry blossom and Turkish Delight, it is the perfect red wine for all occasions.

CLIMATE / SEASON
This is an exceptional vintage and one to watch. The harvest was slightly higher (approx. 1.4% larger) than 2016 following a dry season.

WINEMAKING & VINIFICATION
This wine was made from older bush vines from the Paarl area. I walked through the vineyard several times, tasting the berries more often than in previous years to get the Southern Rhone style and not the typical overcooked / over-ripe South African style Cinsault. It was made with summer in mind, and even though it is a lighter style of red wine it shows the character of the cultivar and the classical traits of the wine’s origin. A careful balance was sought, with both elegance and complexity in mind.

The berries were picked slightly earlier than I would ordinarily pick my reds to capture the freshness I desired. After picking, we took the wines to the winery and dropped the temperature to 10 degrees. The next day I began 40% natural whole bunch fermentation. This lasted for 2 weeks with very soft pump overs so as not to extract too much fruit but rather let the natural fermentation show the beauty and honesty of the cultivar. After press it went to old oak barrels to keep the freshness. A few months later, and I felt it was ready with the freshness of fruit I wanted, while showcasing the terroir and cultivar perfectly. 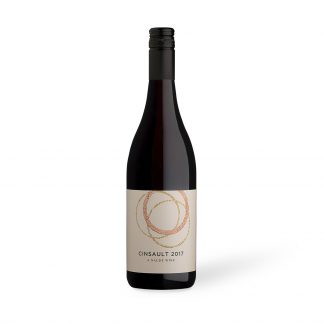