An opulent concentration of yellow fruit and redolent white flowers. The pungent base of tangy nectarine and quince fruit is softened with a mealy beeswax character. Drifting scents of apple blossom and honeydew deliver some alluring top notes. The waxy texture envelops the palate, succulent fruit in the middle, and the flavour protracted by refreshing acidity in the finish.

This is the first Albariño to be produced in South Africa, after the Newton Johnson family imported the vine material of this fragrant variety to the Cape with designs on establishing it as a harmonious pilgrim to the maritime conditions of the Upper Hemel-en-Aarde Valley. The grape has its origins on the wet Atlantic north-west coast of Spain, where monks are believed to have brought it from the Rhine River in central Europe centuries before. Its native soil is of Granite origin, similar to ours, where it expresses subliminal definition, almost Riesling-like florality and complexity.

This vineyard lies mid-slope in deeper, well drained soils at an altitude of 257m, in the porphyritic Granite soils of the Upper Hemel-en-Aarde Valley. This appellation ranges from 4 to 8 km in proximity to the Atlantic Ocean. The climate is cool and temperate, where parallel mountain ranges channel the southerly oceangoing winds through the appellation during the summer. These southerly winds in turn create regular sea mists and overcast conditions, moderating the temperatures in the valley. The annual rainfall is 850mm, with 50% falling in the winter months (May – August).

North-West and South facing. Slope of 13%.

Growing Season & Harvesting A most challenging vintage season, bordering on multiple personality disorder. The grape yields were on average 30% down, mostly due to the interrupted winter and winds during flowering. A period of warm temperatures during mid-July interrupted the winter dormancy and led to uneven budding of the vines later in early September with a very light crop. The spring was the coolest of the last 5 drought years and relatively dry. Gale force winds during the flowering time in November led to a further decrease in crop. Bunches had less berries on them, and they were smaller due to the cool weather and slow vegetative growth. The ripening summer period was the coolest of the last 10 years, leading to harvest dates that were comparable to what we were used to before the drought and very good natural acidity. Intermittent rain during the harvest made it difficult to protect the harvest from rot and our sorting table was as busy as ever.

The Albariño was harvested between 7 and 13 February.

The grapes are handpicked and packed in to small, shallow crates to limit crushing of the bunches. The day’s harvest is cooled down overnight to 8ºC in the winery’s refrigerated cold room. The bunches are hand-sorted on a conveyor table, destemmed and crushed, falling directly into stainless steel tanks where, after overnight skin contact, the juice is allowed to drain into lower tanks for settling. The juice is settled overnight (no enzyme used) and racked to stainless steel, large format old oak and a large concrete egg vessel for fermentation by indigenous yeasts. No sulphur was added before fermentation.

Matured for 8 months in stainless steel (40%), a large concrete egg vessel (40%) and old wooden foudre (20%). No fining and coarse filtration before bottling. 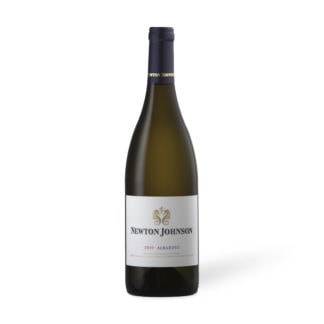