Abundant layers of complex flavour growing increasingly luminescent and steely in the glass. Lucid ripe citrus and white peach are inured with ornate spices and lime zest. The fleshiness of the wine sways and eases the razor-sharp purity of the Granite soil influence. The brittle crunch in the structure hems in the lush texture, with an elongated thread of grape acid resonating in the finish.

Chardonnay is compelling when it has energy, giving you an impressionists’ experience of natural light. It’s an elusive quality that great wines share despite the versatility of the variety. It is more of a winemakers wine where observation pays off, and though it easy to make, in contrast it is surprisingly easy to muddy the message from the vineyard.

The Family Vineyards Chardonnay is comprised of three vineyard sites from the farm, widely varied in their exposure to the sun. The vibrancy, clear cut structure and long flavour we perceive from these granitic slopes is our safeguarded jewel. This well-drained, gravelly soil of mostly quartz, pink feldspar and mica on the lower part of the slope reaches down to deposits of clay. Clay absorbs water and high concentrations of trace elements for the increasingly complex activity of soil microorganisms, which all contributes to the building blocks of the wine’s crystalline flavour profile.

Our south facing Chardonnay vineyards produce edgy and agile wines with nervy acidity, while the north facing slopes are more lustrous wines, delivering weight without being heavy, layering the structure. A natural approach in the winemaking will ensure a complex array of characters in this wine.

Growing Season & Harvesting This is the 3rd straight vintage that was warmer and earlier than the average. The preceding winter had decent rain, though was quite poor in terms of accumulated cold temperatures. Fortunately, there were no major abnormalities with budding in the last week of August, a week later than ’15 and ’16. A sustained, dry and warm summer kept the vine canopies relatively modest in growth vigour, and the crop was lower than average. A significant event was the 50mm of rain received on the 27th January as the first parcels of Pinot Noir were being harvested. This resulted in a delay in ripening for everything else on the vine, with moderate temperatures allowing grape flavours to develop without sugar accumulation. The vineyards were harvested between 6th – 24th of February.

These vineyards lie on the mid to lower slopes at altitudes of 240-260m, in the porphyritic Granite soils of the Upper Hemel-en-Aarde Valley. This appellation ranges from 4 to 8 km in proximity to the Atlantic Ocean. The climate is cool and temperate, where parallel mountain ranges channel the southerly oceangoing winds through the appellation during the summer. These southerly winds in turn create regular sea mists and overcast conditions, moderating the temperatures in the valley. The annual rainfall is 850mm, with 50% falling in the winter months (May – August).

The grapes are packed in to large surface area crates to limit crushing of the bunches . The day’s harvest is cooled down overnight to 8 ºC in the winery’s refrigerated cold room. The grape bunches are hand-sorted on a conveyor and fed directly by chute to the press for whole bunch pressing. The juice is settled by temperature only (no enzyme) and racked into barrel for fermentation by indigenous yeasts . No lees stirring was applied.

Matured for 11 months in 228L and 500L barrels produced in Burgundy and custom made for these vineyards. Tighter grained oak is preferred for subtle f avour, with longer seasoning and slower, lower temperature toast ing. New oak comprises 23%. The wine is racked to stainless steel for another 2 months of élevage. No fining and light filtration before bottling. 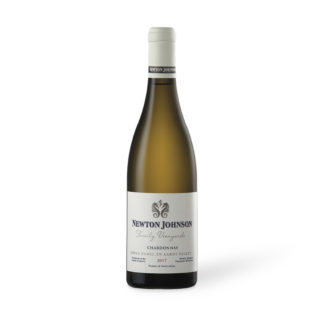