It takes courage to grow Cabernet Sauvignon in the Upper Hemel-en-Aarde Valley, but Craig Wessels’ two sites, both planted in 1999 but with different soil types and exposures, consistently deliver the goods. This is lighter and more forward than the 2015 – it could almost be a Cabernet Franc – with graphite and black cherry flavours and filigree tannins. 95/100 Tim Atkin MW 2020-28

The Vineyards Main Road and Dignity

Restless River farm is in the cooler Hemel-en-Aarde Valley. The appellation is granite based, and the vineyards are positioned mid slope at an elevation of 300m. The chilly Atlantic Ocean is 5km away and acts as a giant air-conditioner. This 100% Cabernet Sauvignon bears the name of its two vineyards, each registered as a Single Vineyard. Slopes are north, east and west facing. Shallow top soils vary from rocky, gravelly sandstone to mineral-rich koffie klip (coffee stone). Below this is decomposed granite clay.

Select parcels were hand-picked over a period of 4-5 weeks in March and April. After a light de-stemming, the grapes were naturally fermented in small, open top oak vats. One or two short punchdowns a day kept the skins healthy whilst the various strains of indigenous yeasts made the wine. After a long maceration, the skins were pressed in an old basket press. The wine then went into French oak barriques (20% new), where it was raised sur lie and undisturbed for 21 months. It was then racked from barrel and allowed a few more weeks to integrate before being bottled, without fining. The wine was then bottle aged for a further two years before release. 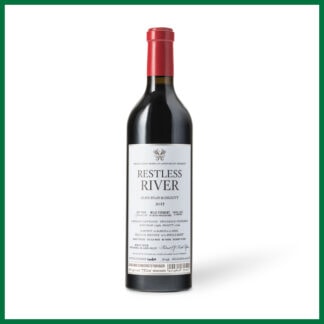