Spicy, floral and with the freshness that’s a feature of many Ridge Pinots, it’s refined and elegant. The 10% whole bunches and 30% new wood are deftly integrated, as ever. 94/100 Tim Atkin MW

Tesselaarsdal was founded in 2015 by long-standing Hamilton Russell vineyards employee, Berene Sauls. This wine is named after the historic Overberg farming hamlet of Tesselaarsdal, not far from the Hemel-en-Aarde ridge wine appellation, in which Berene was born. She is a descendant of the freed slaves who were bequeathed the land by former East India company settler, Johannes Tesselaar in 1810.

Extreme care is taken to ensure this small-production, classically styled Pinot noir expresses the personality of the cool, maritime, Hemel-en-Aarde Ridge from un-irrigated vines and its elevated, stony, clay and iron-rich soils.

After the early and short 2015 and 2016 harvests, 2018, like 2017 was back to our usual timing, beginning at the end of the first week of February, but (a longer harvest) finishing at the end of the first week of March. Budding was even and successful, with higher than usual early Spring temperatures, but an unusually wet November and a cool December affected flowering and fruit-set, resulting in particularly low yields – far lower than our already low yields. The berries were smaller and the bunches were lighter, but the resulting wines were deeper, fuller and more structured. December and January were drier than average, making for relatively easy and successful disease control organically, with February only very slightly wetter than our long term average. A warmer than average February, combined with the very low yields and small berries did however contribute to the riper more opulent style of 2018 compared to 2017. One of the features of 2018 was fairly variable ripening within individual vineyards, and within individual bunches. Picking on taste, combined with analysis, and picking particular areas within individual vineyards at different times, was particularly important in 2018. This required a high level of vigilance and very close teamwork between cellar and vineyard, both of which were carried out with great success. 2018 was an excellent vintage for us. 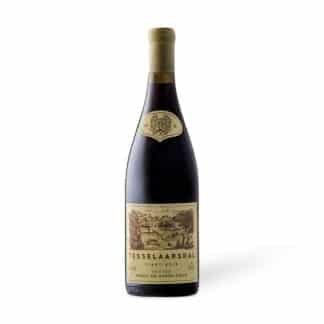